Fun with Mac Pro SSD Performance vs SAS vs eSATA

This week I finally got around to biting the bullet and buying a 250 GB SSD for my Mac Pro. I’ve been using MacBook Airs with SSDs for a few years now, but since I had a fast SAS RAID array on my Mac Pro, I had been pretty content to live without one in the Mac Pro. My Mac Pro is almost 4 years old and really starting to show its age. I’ve been hoping to keep it limping along until the next revision.

So with mild expectations, I bought an SSD from OWC (and a NewerTech 3.5″/2.5″ bracket from Amazon, shown in the picture above) and configured it as the boot/applications drive. I did a fresh install of Snow Leopard onto the SSD, updated it, and migrated over my applications. Using the ‘Advanced Options’ by right-clicking my account in the System Prefs > Accounts panel, I pointed my user account at my old home folder on the SAS RAID. Everything was good but a few things didn’t work as expected:

1. DropBox seems to have hard-coded /Users/<name>/Dropbox for its path. But my home directory is now /Volumes/sas-raid/Users/mitch. I wonder what else has the home directory hard-coded.
2. I forgot to change my boot arguments to boot 64-bit after reinstalling Snow Leopard, which caused some confusions for Adobe applications, Drobo, and others until I remembered to change that. (Note: This has nothing to do with the SSD, but rather that I was using 64-bit prior because I have 32 GB of RAM.)

So the SSD performs slower than the RAID for everything sequential, which is not surprising. (If you’re wondering why these results are lower than some SSD numbers you might have seen, bear in mind the 2008 Mac Pro has a slower SATA interface than the modern stuff.) However, the SSD is faster–in fact, twice as fast for small random reads! This is rather remarkable–the SSD runs about $400 and the RAID setup is about $2,000 (though with 32x the physical capacity).

The “real world” results in terms of how the computer feels is fantastic. All the usual speed you’ve heard about SSDs was true for me too–faster OS boot, faster login, faster app launches. I have a Windows 7 Pro VM for Outlook and a Linux development VM, both of which I tucked onto the SSD and resume/suspend is very fast–and best of all, VM operations don’t interfere with other operations on the computer. I will probably add a second SSD for these two VMs shortly.

Other Benchmarks
Since I was doing benchmarking anyway, I also compared my external eSATA 4 disk RAID and the DroboPro connected via iSCSI. The eSATA results are quite good for the price ($50 for the Sonnet Temp E2P card and you can put together an array with similar performance for $600). As expected, the Drobo is quite a bit slower (although sequential I/O is decent), but no one buys a Drobo for performance anyway: 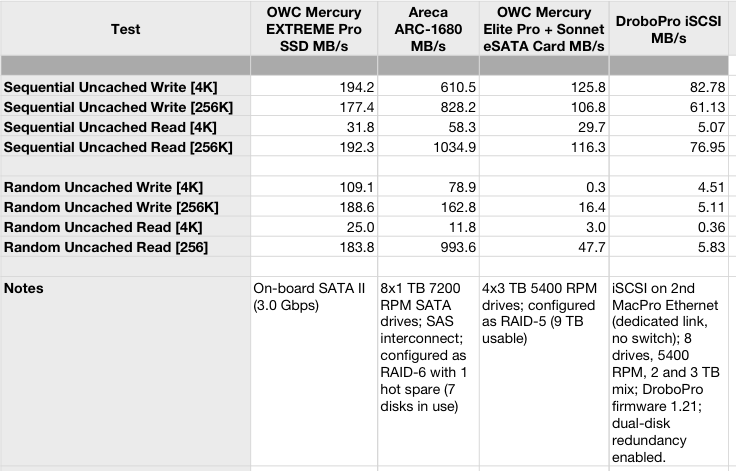 Most striking here is the 300x difference between the small random writes on the eSATA RAID and the SSD! I believe this RAID is waiting for data to be on disk (vs the disk cache) and perhaps the other RAID examples are not (Areca is pretty clear on requiring a UPS for data integrity). And of course, we see an 8x favor for the SSD for small random reads. For the cost, I really like the performance of this RAID unit and plan to buy another of these with 7200 RPM drives. The Sonnet eSATA card I am using is SATA I and II; upgrading to the Sonnet Tempo 6Gb card probably won’t open up the performance of this RAID further (which OWC says is 3.0Gbps = SATA II).

What should you conclude? Certainly what makes sense for your work is likely different than mine. But you’re still going to have an OS and applications and the SSD random I/O performance makes that quick. What else you augment the SSD with may vary, but I think at this point, any and every power user is going to see benefit from investing in one or more SSDs.

All the benchmarks were performed with XBench 2.1. I ran them a few times and eyeballed that the results were relatively consistent. I didn’t do any averaging. The computer was otherwise relatively idle, with regards to both CPU and I/O. An obvious benchmark that is missing here is comparing the speed of a single SATA internal disk. I just don’t have any bare drives in my Mac Pro to test at this time.