Back to the Stacks

Around 2004, when flatscreens were starting to come down in price, I embarked on an adventure. I bought a mixture of 17″ and 19″ panels–8 of them–and some Ergotron DS100 quad screen stands to try stacked monitors. You might recall a 17″ panel was 1280×1024, a 5:4 aspect ratio, and large enough for essentially one window of code. With a mix of terminal windows and code buffers, I wanted to have ~4 buffers on the bottom row and a mix of terminal windows and header files on the top row.

I never really took a good picture of the setup, but the net-net was that it didn’t work very well. The second row was overwhelming; it gave me headaches, and I felt like the world was bearing down on me. It was disappointing, but I continued to use my screens in a single row horizontally in a variety of configurations. Typically I had 4-6 displays on my main coding machine, and an extra display or two for iTunes, documentation, whatrever on adjacent computers.

In 2007, I started living in Boston part-time and bought a 24″ 1920×1200 screen in Boston and I quickly bought a second one for my home in California. I had been wary after the headache-setup of trying larger screens than 19″, but once I was stuck with coding on a laptop that I carried back and forth, I wanted the biggest screen possible–and it turned out to be fantastic. In June 2007, I consolidated my life to Boston and ended up running two 24″ with two of my 17″ panels in portrait mode on either side. I would use a large window stretched across the screens and 2 buffers per 24″ screen with terminals on the 17″ panels.

In 2008, Apple “finally” released an updated Mac Pro (the wait seemed long at the time–but nothing like Apple’s pace these days). I bought my first Cinema 30″ screen around that time and the sheer wonder of 2560×1600 and all it could do was not lost on me. I quickly bought another three or four 30″ screens and some 20″ screens that I ran in portrait mode. 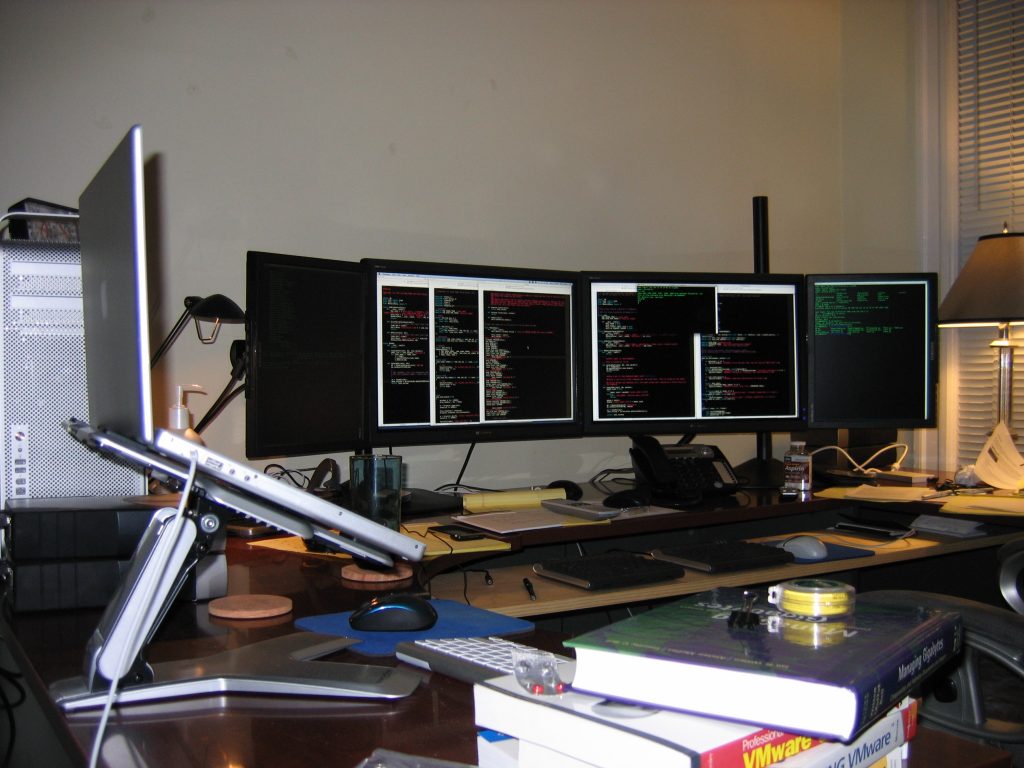 The Apple screens used a fluorescent bulb. These don’t last forever and by 2014, I had upgraded to 3×30″ HP screens, as the Apples were getting too dark. The HPs I bought were the last pre-LED backlight 30″s that HP sold, unfortunately, but they held up well–and they used DisplayPort and didn’t require all the power bricks and dongles that the Apples did. I sold all the Apples on Craigslist.

In 2016, Dell released the 43″ 4K screen and I ordered one the day they announced it while waiting for take off on an airplane. I eventually began running the 43″ with new LED-backlit 24″ screens in portrait and picked up a second 43″ ViewSonic screen for my secondary coding workstation.

A few months ago, for some reason, I started wondering about stacked displays again. I was dubious but found some tall monitor arms–it was challenging to find arms tall enough that the 24″s would clear the height of the 43″ displays, and I finally upgraded my 43″ screens to be mounted on monitor arms (an Ergotron HX for the Dell and a now-discontinued HumanScale M8 for the ViewSonic, due to the terrible VESA mounting position on the ViewSonic–the Ergotron arm isn’t tall enough to mount the ViewSonic). 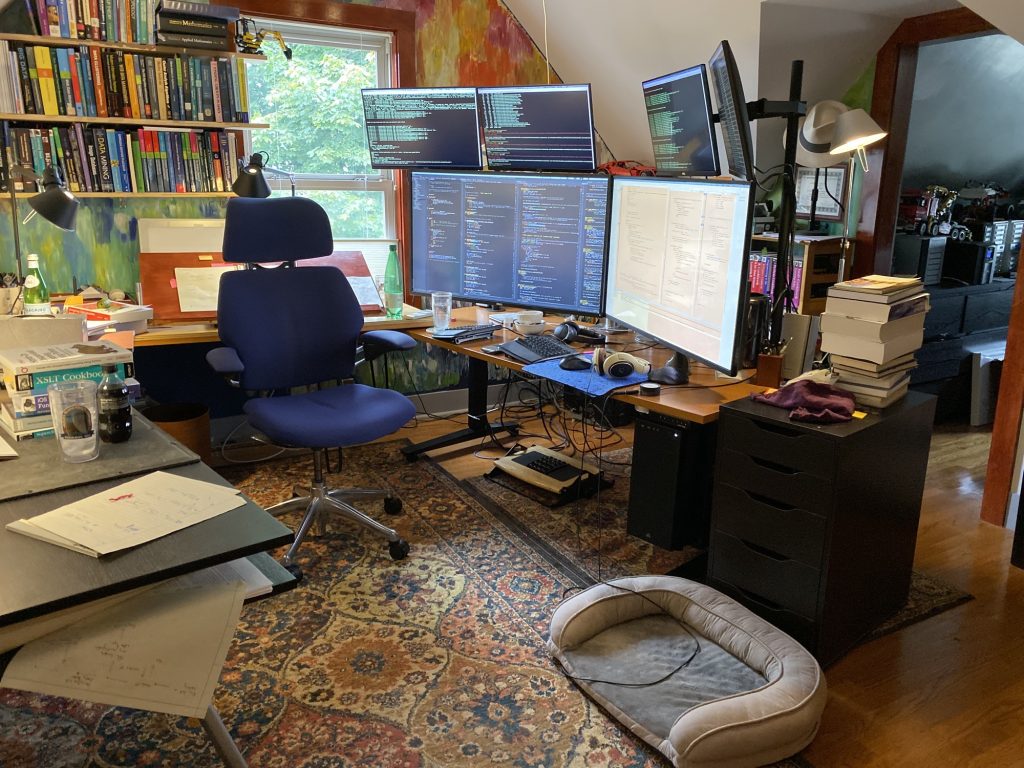 After a few months of use, I’m happy to say it’s been a wonderful experience. I have room for two huge development windows with 3-4 buffers each across the bottom, and all my remote shells, logs, Slack up above. The 43″ screens are big enough that I don’t see the 24″ monitors unless I want to look up at them. I suspect the fact the screens are all LED helps as well–and I’m much more aggressive about using giant fonts than I was 15 years ago (my vision is still good enough not to need correction, but no reason to push it).

I put the tall arms into existing grommet holes on my desktop, which turned out to provide some separation between the left/right pair, which seems to be fine for how I work with them.
All six are connected to my 2013 Mac Pro. Five are connected via DisplayPort and one of the 24″s via HDMI, since my sixth Thunderbolt port has some hard drive arrays hanging off it.

The issues I’ve blogged about before still exist: I wish for curved 43″-caliber displays; I have owned the Dell 38″ curved, and while it’s very nice–a much higher quality screen than the Dell 43″–the height is too short after having lived with the 43″ height for so long.

I’ve written about 20,000 lines of code in the last few months while working at this set-up on products with a significant number of moving parts. It’s just been awesome. If you haven’t tried stacking screens, it could be a good move.